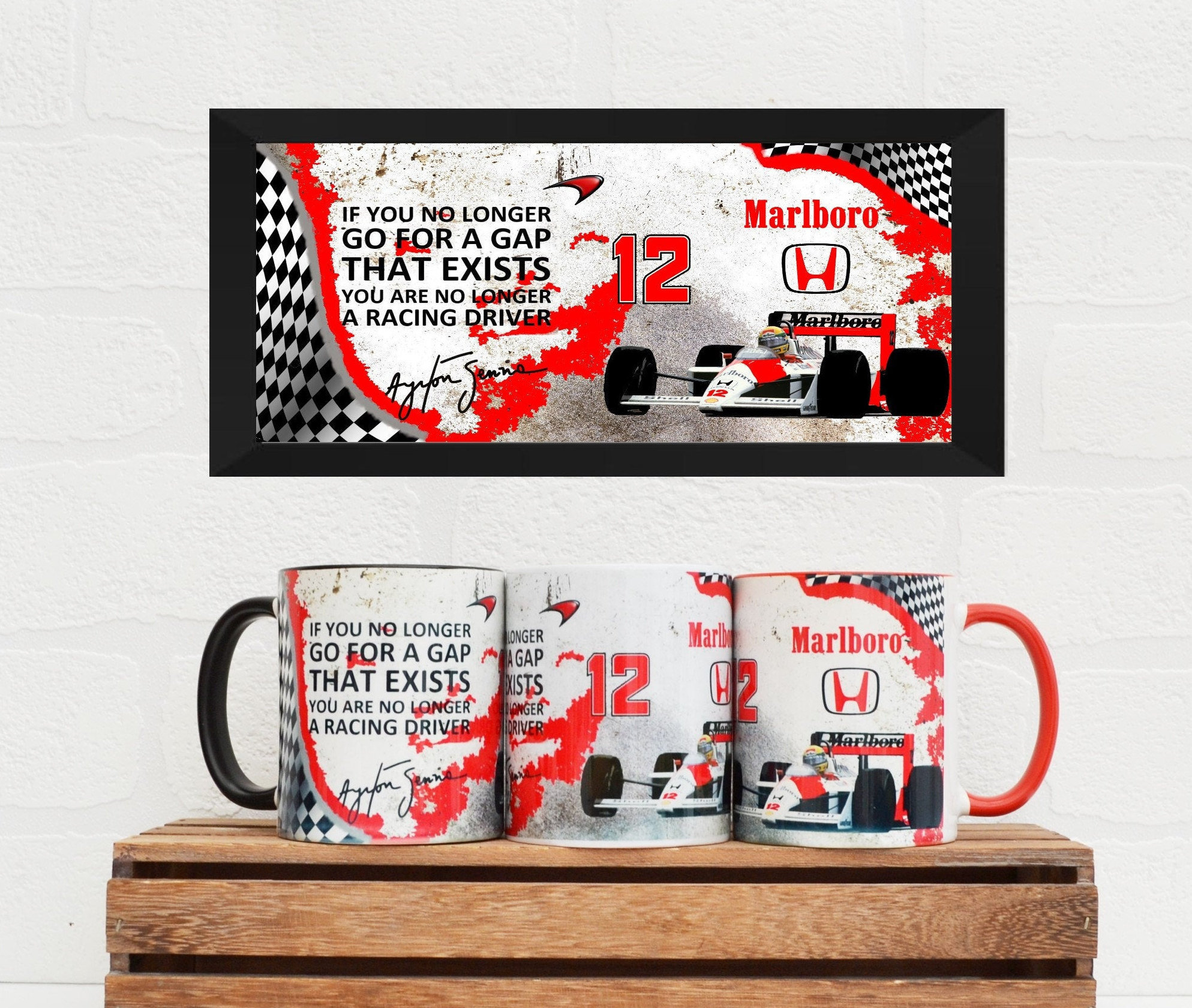 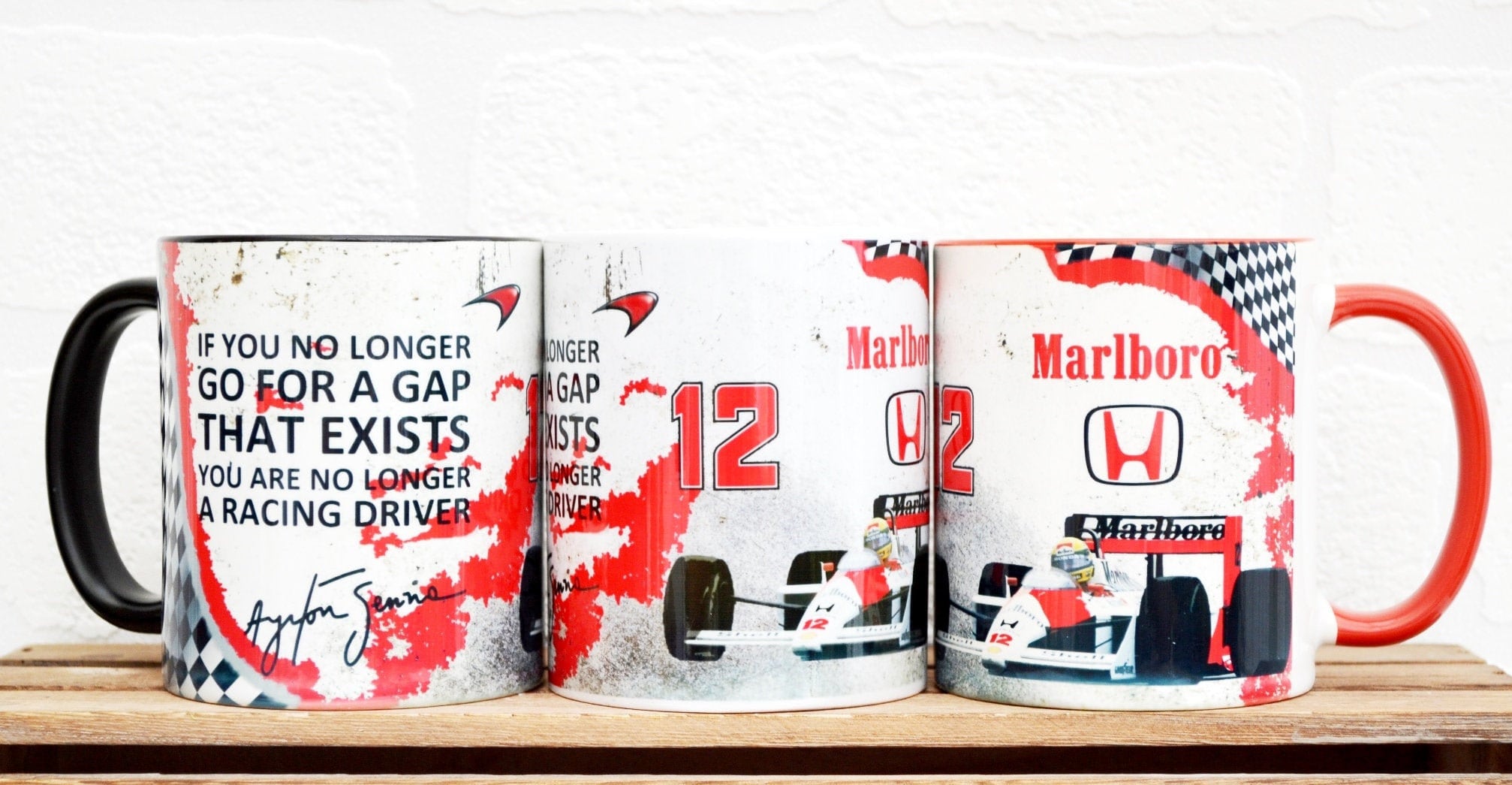 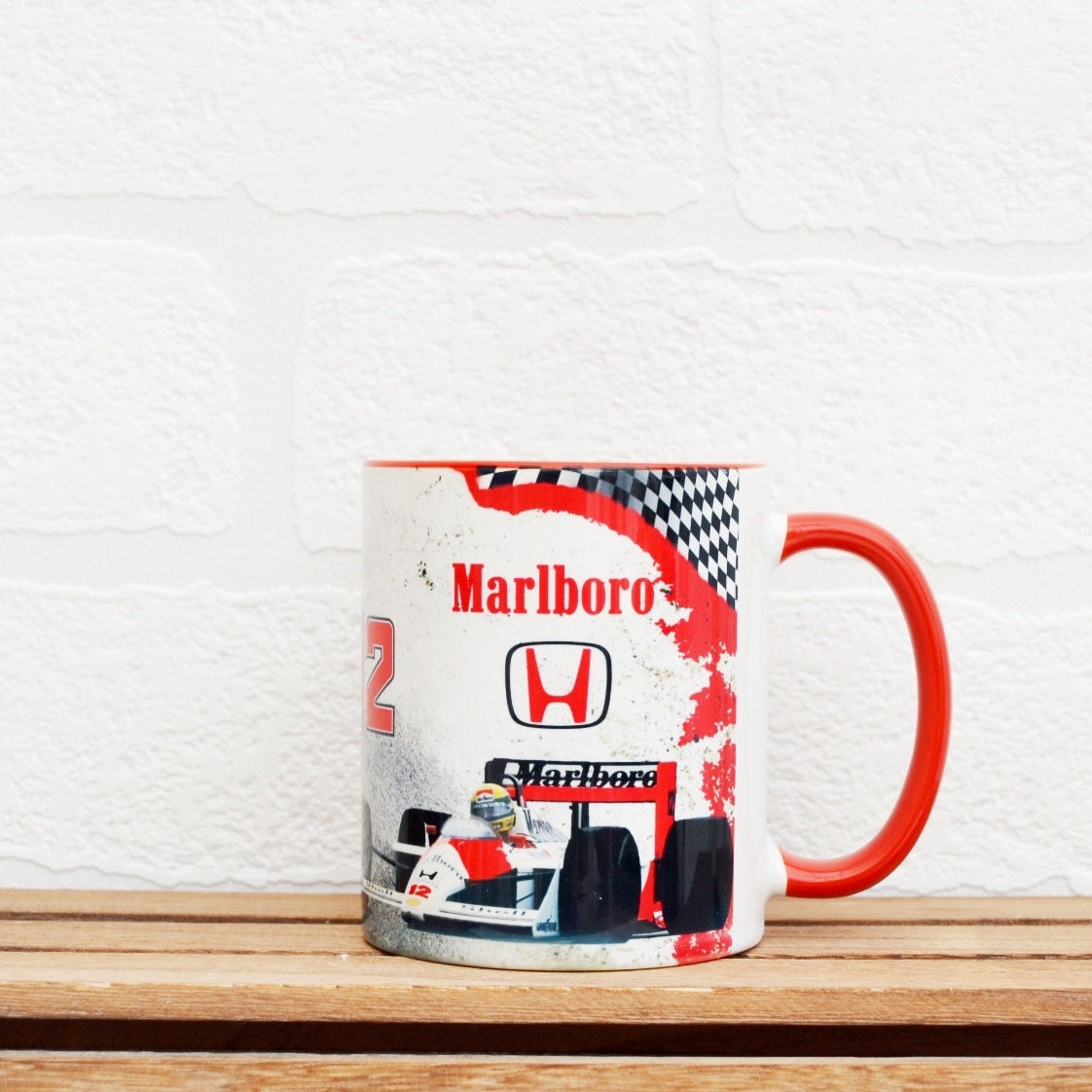 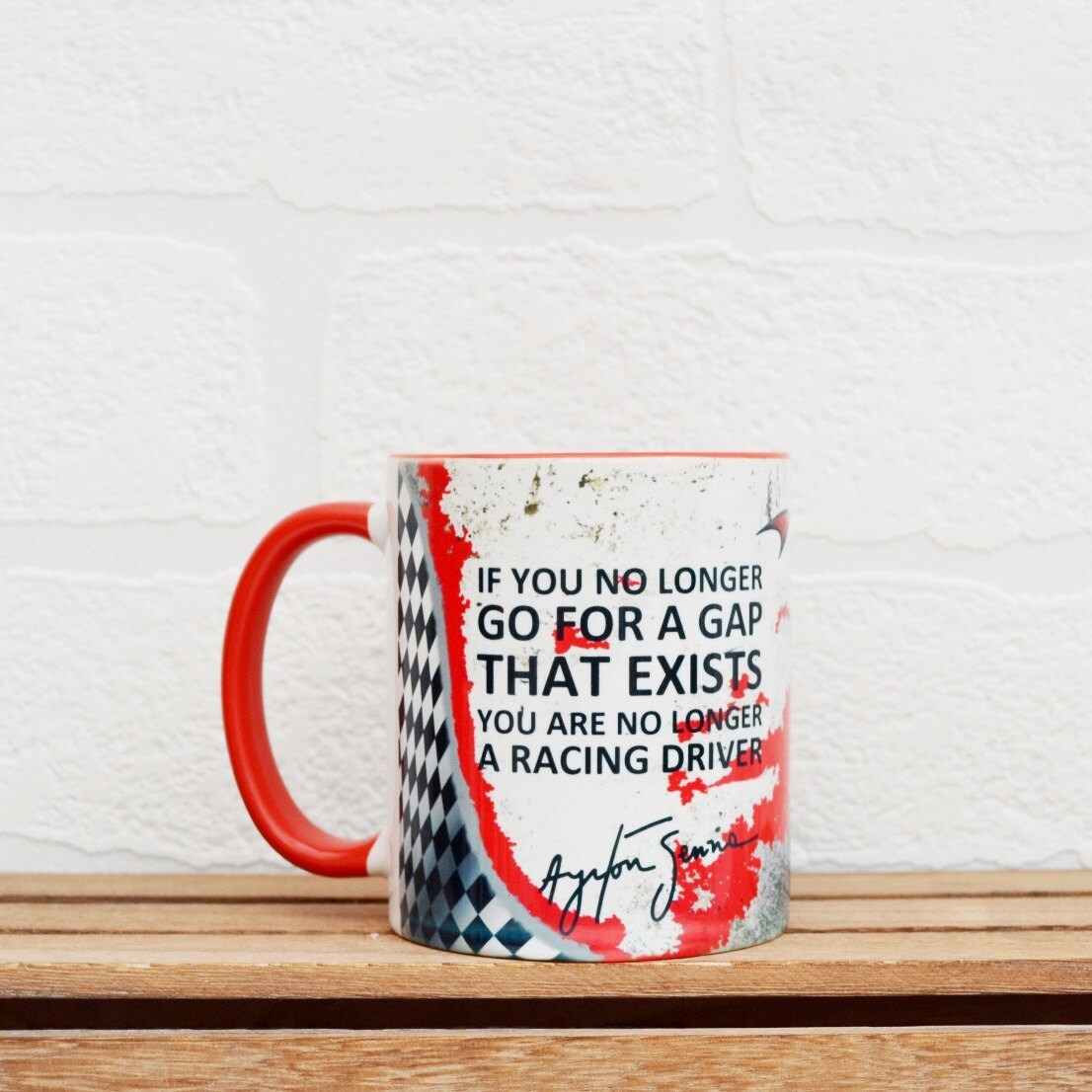 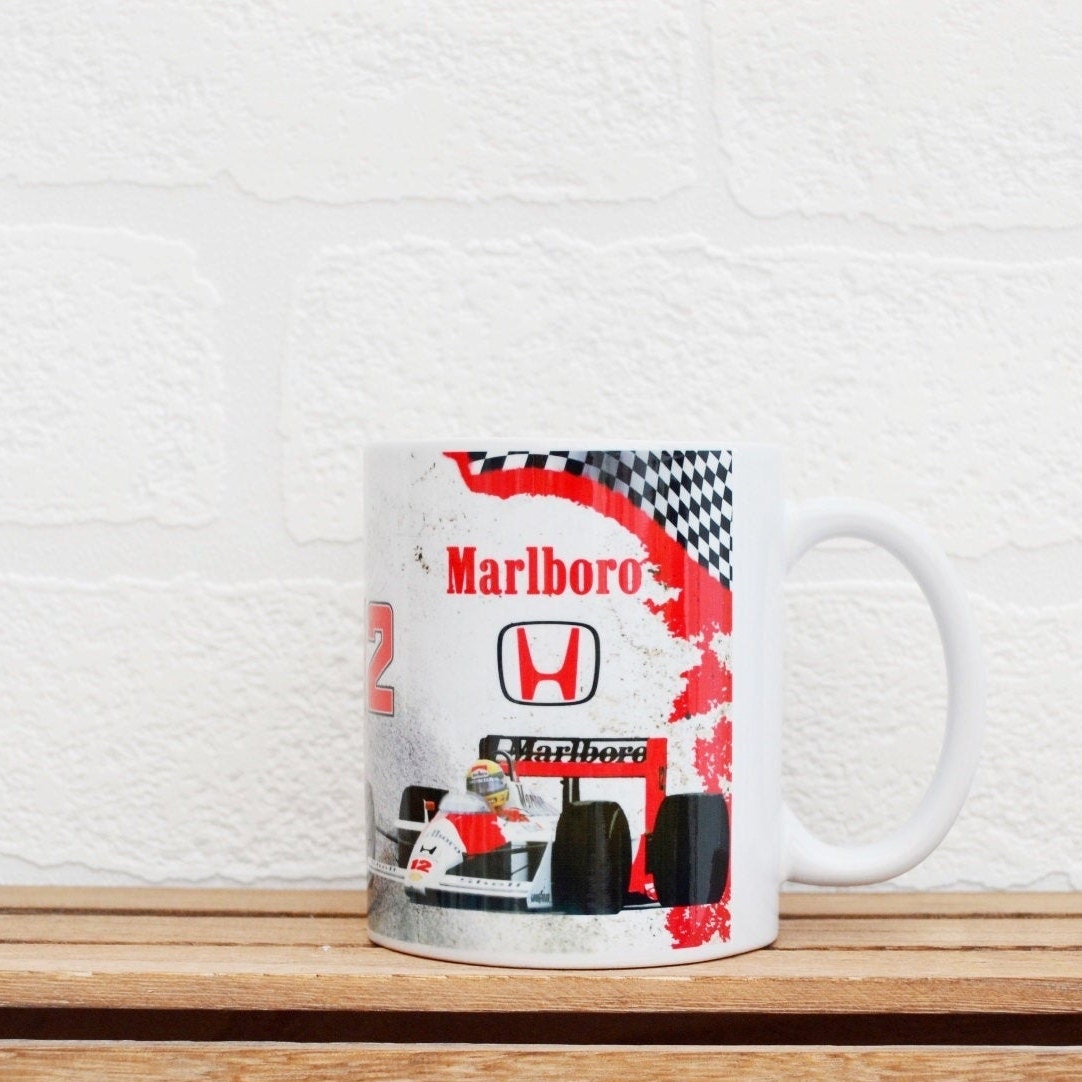 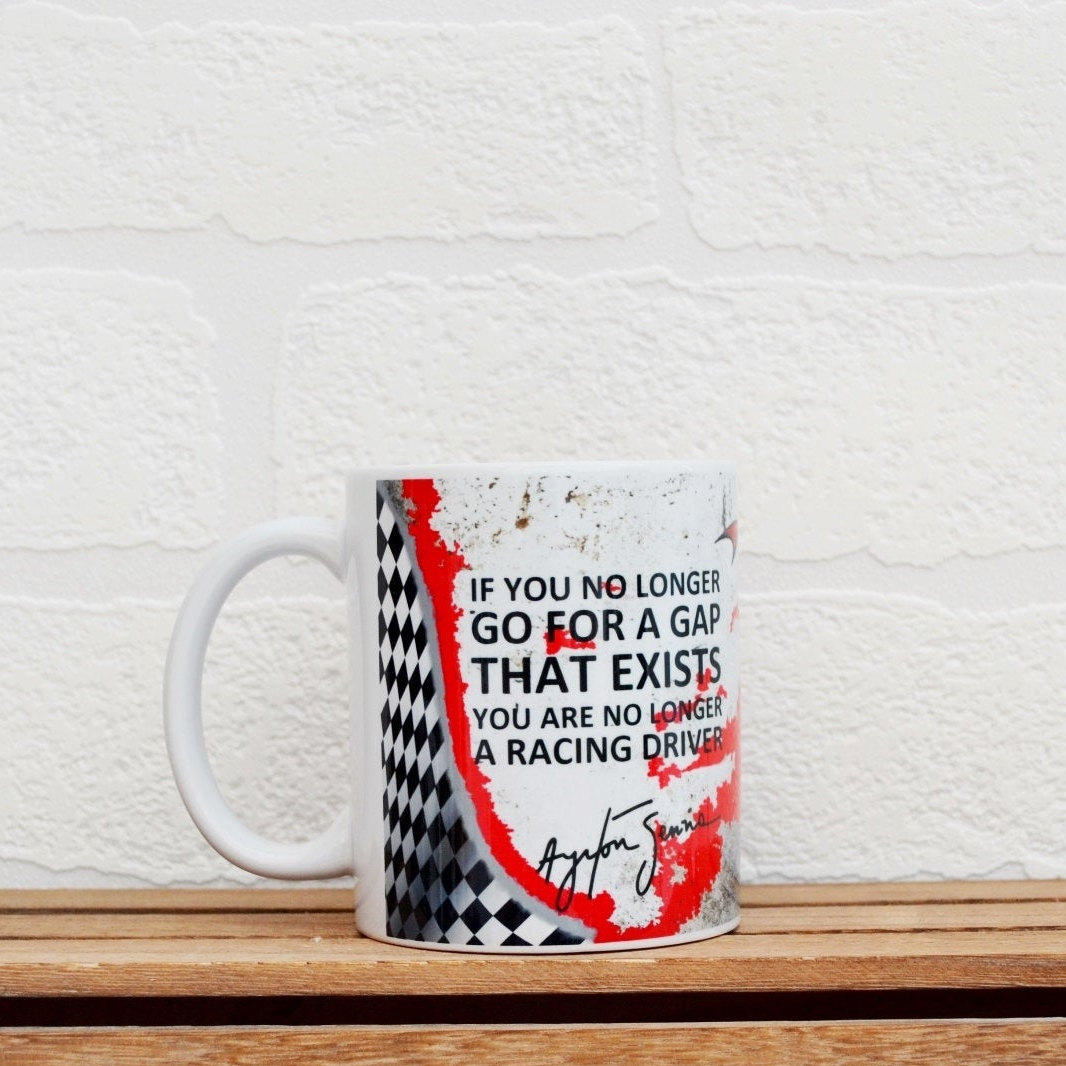 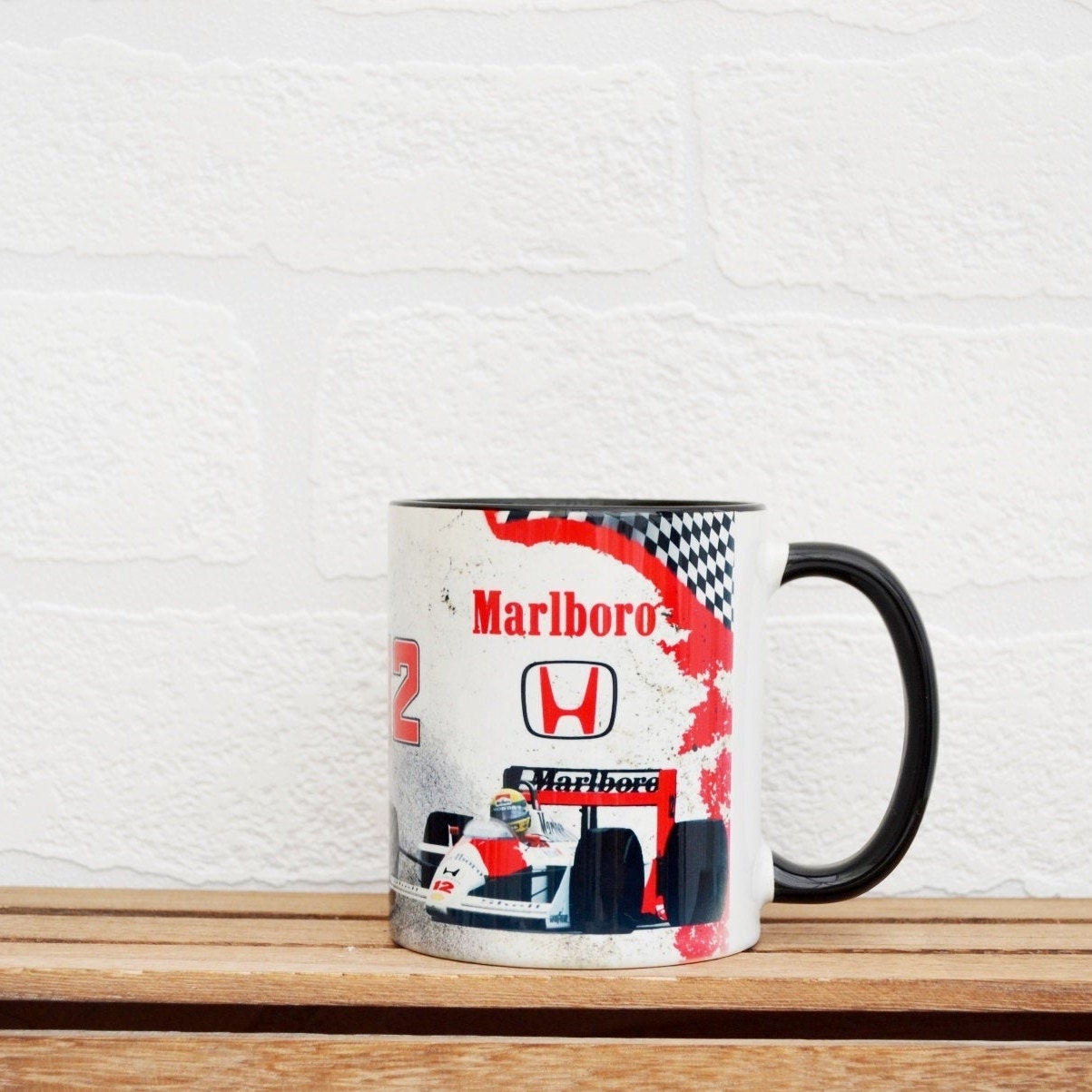 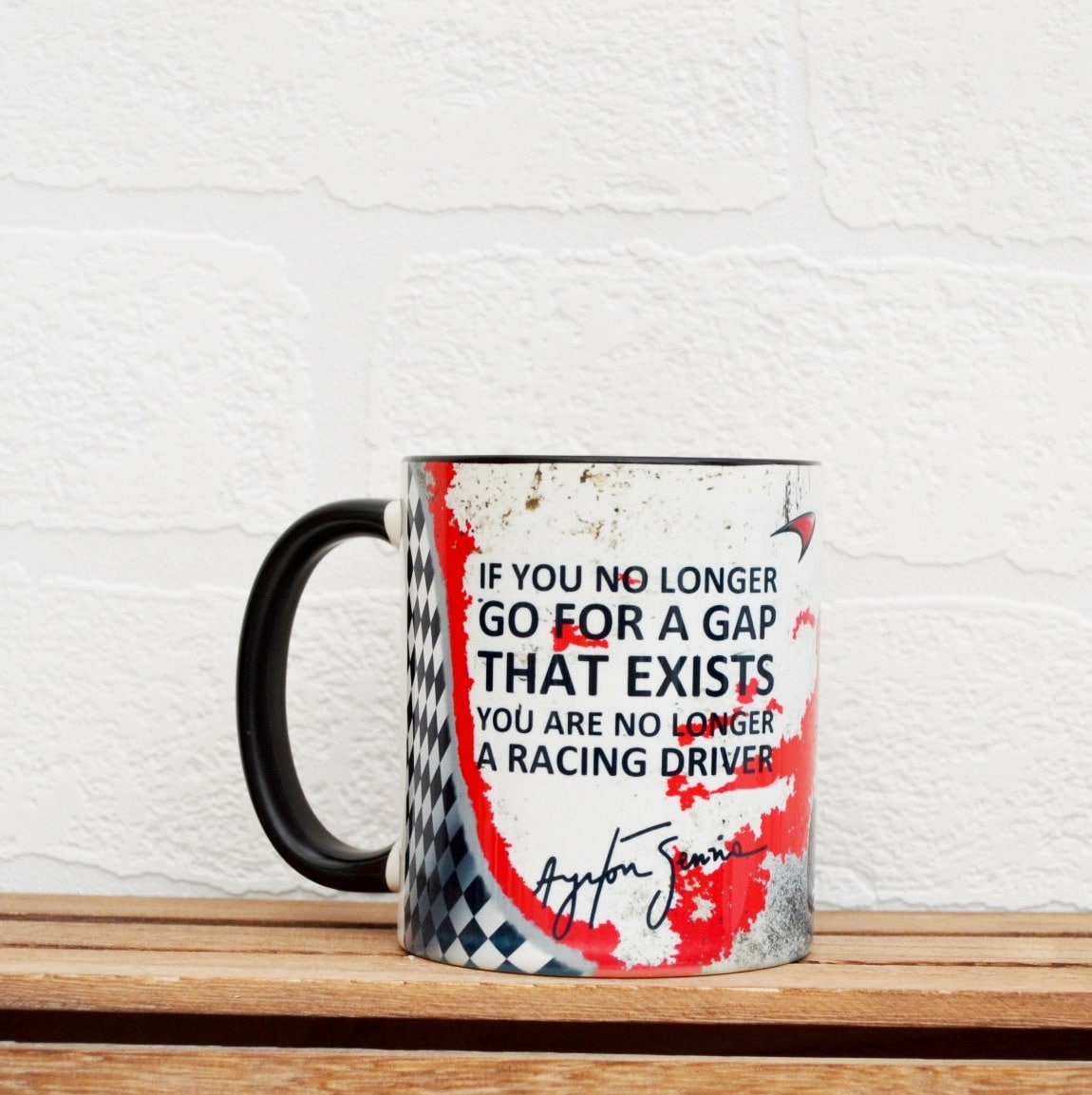 Lovely mugs that feature Ayrton Senna quote and McLaren from 1988
Quote: If you no longer go for a gap that exists. You are no longer a Racing Driver

Aryton Senna made his F1 debut in 1984 with Toleman-Hart and made it on to the podium 3 times. Before moving to Lotus in 1985 for 3 seasons winning 6 races with 16 further podiums. In 1988, he joined Frenchman Alain Prost at McLaren-Honda. The foundation for a fierce competition between both drivers for the next couple of years. Between them they won 16 Grands Prix that year with Senna winning his first World Championship. Senna went on to win two more World Championships in 1990 and 1991. In 1992 and 1993 he lost out to Nigel Mansell and Alain Prost who both drove for Williams-Renault. For 1994 season Senna joined Williams, and secured 3 pole positions and the first 3 races, but retired at all 3.

Unfortunately at the San Marino Grand Prix in 1994, it was a dark weekend in Motorsport, as 3 drivers had horrible accidents. During the afternoon qualifying session Rubens Barrichello was involved in a serious accident when his car became airborne at the Variante Bassa chicane and hit the tyre wall and fence. (Rubens walked away, but withdrew from the event) Once Saturday qualifying resumed later on, Austrian rookie Roland Ratzenberger was killed after the front wing of his Simtek-Ford broke entering the 310km/h (190mph) Villeneuve corner, sending the car into a concrete retaining wall at high speed. There was also a start-line accident which involved JJ Lehto's Benetton-Ford and Pedro Lamy's Lotus, the wheel and debris landed in the main grandstand, injuring eight fans and 1 policeman. As the race resumed after a couple of laps behind the Vectra safety car, Senna rounded the high speed Tamburello corner on lap 7, his car left the racing line at around 307km/h (191mph), ran in a straight line off the track into the concrete wall and was pronounced dead at the hospital.

On a positive note he won 41 races, on the podium 80 times, had 65 pole positions and 19 fastest laps. He his widely regarded as one of the greatest F1 drivers of all time.

Please look at my shop for more quotes.

Great item, great quality and will make a perfect gift…..thank you.

A gift for a racing mad Senna fan who loved it and won't use another mug now.

I purchased a Senna quote mug for my husband as a Father's Day gift from my son. The mug print is excellent quality and the delivery was super quick. My husband is really happy with his gift. I would definitely recommend both the item and GarageFindsUK